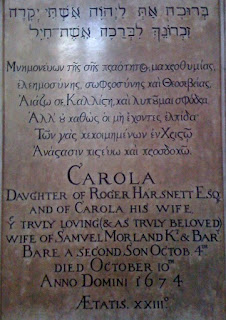 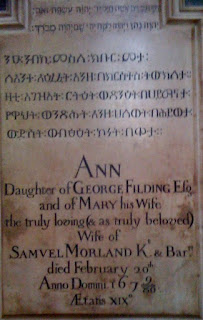 Today in Austen L and Janeites, Christy wrote: More updates on the Byrne Portrait from austenonly:

I responded as follows:

austenonly (Julie Wakefield, or JW) may be pretty solid on uncontroversial and straightforward questions about Jane Austen, but is far from gospel for me as a source of creative interpretations of more subtle Austenian questions like this, and my comments, below, are a good example of why.

First, as to Eliza Chute as portraitist, JW read the same Tweet I did that Paula Byrne sent out yesterday afternoon about Byrne possibly backing off on Eliza Chute as the portraitist. Byrne has not Tweeted at all in the nearly 24 hours since then (and one day is an eternity, in the accelerated timeframe of Twitter "instantaneity"), and I can't find anything via Google that provides any update from that Tweet, so I wonder if Byrne is waiting for more definitive information about the markings on the back of the portrait that JW mentioned, (that supposedly suggest a "hack" portraitist), before giving an official update.

In the interim, I am NOT so quick to dismiss Eliza Chute as a candidate, and my best hunch is that perhaps there is going to be a plausible explanation, consistent with all the facts as they are developed, that would include _both_ Chute, the amateur, and _also_ a hack, in some combination of actions, that produced the final product, i.e., this portrait. Everything I know about Jane Austen tells me that Eliza Chute was a key player in this drama.

And....as for the following further comments by Wakefield at austenonly....

"If I interpret her tweets correctly, it would seem that Dr Byrne is now appearing to pursue the argument that the inclusion of Westminster Abbey in the drawing may be due to the fact that Jane Austen’s brother, Frank, was made a Companion of the Order of the Bath in 1815, something she thinks is missed by most Austen biographers. In Jane Austen’s Sailor Brothers( 1905), which was of course written by Frank’s grandson, John Henry Hubback and his daughter, Edith Charlotte Hubback, the award is clearly mentioned......So, if I interpret that correctly, there would not have been any ceremony for the family to attend at the Abbey,and the association with that particular place would surely be lessened? I also think we do have to concede that the connection with Westminster Abbey is Frank’s and not his sisters. Would a reference to the Abbey really have been inserted into a portrait of Jane Austen? And why, if this was the connection, was only the corner of Westminster Abbey’s west front shown (together with the tower of St Margaret’s) in the drawing? "

I agree with JW that an alleged Frank Austen connection to that portrait of JA is completely offbase. After all, this portrait is of Jane Austen, not Frank Austen! The idea that a portrait of Jane would be made as part of celebration of Frank's achievement would be part and parcel of the same silliness that suggests that the Austen women lived in the shadows of the Austen men, and that achievements of Austen _sons_ were "picturesque" (or, as Seinfeld might say, "portrait-worthy") but that achievement of Austen _daughters_ were not. I am really surprised that Byrne, who has shown real understanding of JA's feminism, would concoct such a decidedly un-feminist rationale.

Part of Byrne's problem, as I see it, is that she is so desperately trying to connect the dots to a date for the portrait in 1815 or thereabouts. In my considered opinion---and for reasons I will be writing about when the time is right in the near future----I believe the date was several years _before_ 1815!

But, where I suspect JW would disagree with me re Westminster Abbey's presence in the portrait is that I don't consider the ruling out of a "Frank Austen celebration" as being in any way a weakness in Byrne's claim that the portrait is of our Jane Austen. Why?


THREE REASONS WHY WESTMINSTER ABBEY WOULD BE INCLUDED IN A PORTRAIT HONORING JANE AUSTEN'S WRITING CAREER:

Because (as you heard me speak at the Portland AGM in October, 2009, Christy), in my talk then I gave not one but THREE _compelling_ reasons why Westminster Abbey would have been a _perfect_ symbol for a portraitist of Jane Austen to include in a portrait celebrating JA's success as an author:

First, I realized early in 2009 that the name NORTHanger Abbey was a clever play on the name WESTminster Abbey, especially as I also claimed that Shakespeare's _Hamlet_ was a very significant but totally veiled allusive source for Northanger Abbey. And as anyone familiar with _Hamlet_ would know, the little word game I claim JA engaged in with names of geographical directions ("north" and "west") in names of Abbey (and don't forget _Soth_ erton in that regard as well!) is an unmistakable echo of the following rather famous speech by Hamlet, which has also served as the basis of the title of a rather famous _movie_ by Alfred Hitchcock:

"I am but mad north-north-west: when the wind is southerly I know a hawk from a handsaw."

So we have north (twice) and west together in that one marvelous compound word. PLUS.....two other wonderful parts of JA's elaborate little word game:

(b) JA's famous April Fool's Day, 1809 letter to Crosby demanding the return of the manuscript of _Susan_ (later, of course, retitled Northanger Abbey!) was signed by JA under the pseudonym "Mrs. Ashton Dennis" which is abbreviated as M.A.D.----as in JA being, like a forerunner of Howard Beale, "_mad_ as hell and not going to take it any more (!) " in terms of a publisher sitting on that manuscript for nearly a decade without publishing it!

Think I'm being too clever by half, and projecting my own overactive paranomosiac imagination in a "direction" JA herself never intended or imagined, in claiming that Northanger Abbey stands for Westminster Abbey?

Well, then consider next my _second_ reason, which is that, as Terry Robinson pointed out in a 2009 article, _Henry_ VIII and three of his six queens who had Christian names which were variants on _Catherine_ , were very likely sources for the names of Henry Tilney and Catherine Morland, and these real life regal personages were, as we all know, all rather closely associated with Westminster Abbey!


But my third reason which I disclosed in Portland is my personal favorite---I came across a remarkable factoid in 2009, which is that in Westminster Abbey there are two memorials hanging side by side on the wall in a rarely viewed nave in the Abbey, which were erected there by a grieving middle aged husband who had "murdered" not one but "two" much younger wives, via death in childbirth. And these "awful memorials".....

["...With all the chances against her of house, hall, place, park, court, and cottage, Northanger turned up an abbey, and she was to be its inhabitant. Its long, damp passages, its narrow cells and ruined chapel, were to be within her daily reach, and she could not entirely subdue the hope of some traditional legends, some awful memorials of an injured and ill-fated nun...."]

.....were, I claim viewed by Jane Austen herself during a visit to Westminster Abbey. And the reason I am so certain of this is that the gentleman involved was a very famous fellow in his day (the latter part of the 17th century), and his name just happened to be Samuel _Morland_! And these memorials were intentionally echoed by JA when she described General Tilney's great grief over the death of Mrs. Tilney, whom I have argued is the symbol of all the English wives who died in childbirth.

And you've probably figured out that the images of those memorials are what you see at the top of this post!


And so I believe I've made a pretty good case that I am not "mad", but have demonstrated that a portraitist celebrating JA's career as an author would have had these three very good reasons, at the very least, to include a view of Westminster Abbey in the background.