Rick Santorum would have been the worst person in the world to Jane Austen too! 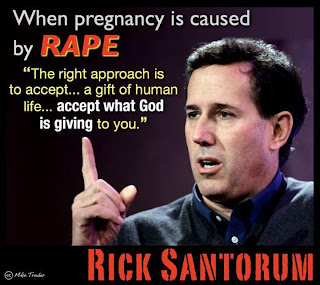 Apropos Rick Santorum proving himself the worst person in the world in terms of female reproductive rights, if Jane Austen were alive today, she'd be writing stuff about him in her novels and letters every bit as angry and sarcastic as any feminist living today 2 centuries after her death! She was a staunch enemy of men controlling women's bodies--but in her era women did not have the luxury of any reproductive rights whatsoever, so that most married gentlewomen of her era were turned into breeding cows, and were replaced by younger wives when they died (as they did all too often) in childbirth!

Start here in my blog...

and then free free to browse about 40 other posts at this blog on this general theme-just search "pregnancy" and "childbirth".

Here's how much confidence Jane Austen had in the Anglican Church, the English government and the average English husband:

""If I understand you rightly, you had formed a surmise of such horror as I have hardly words to—Dear Miss Morland, consider the dreadful nature of the suspicions you have entertained. What have you been judging from? Remember the country and the age in which we live. Remember that we are English, that we are Christians. Consult your own understanding, your own sense of the probable, your own observation of what is passing around you. Does our education prepare us for such atrocities? Do our laws connive at them? Could they be perpetrated without being known, in a country like this, where social and literary intercourse is on such a footing, where every man is surrounded by a neighbourhood of voluntary spies, and where roads and newspapers lay everything open? Dearest Miss Morland, what ideas have you been admitting?"

This passage has been misunderstood by most Janeites for 2 centuries---Jane Austen's point really is that horrible things like serial pregnancy and death in childbirth were so "normal" in her day that nobody lifted a finger to stop it!

In the novel, Catherine Morland, at age 18, is shamed out of her suspicions about male oppression of women. How horrible that 2 centuries later, women still need to defend their reproductive rights against men like Rick Santorum.

If only we could transport Austen to a Republican debate stage! I would love to hear her rebuttal to the nonsense the candidates have been spouting.

Indeed, Alexa, she'd have reduced a sanctimonious hypocritical prig like him to rubble with her wit and irony, and he'd never know what hit him!

The "Minister of Health" in Turkey is saying the very same thing nowadays. With the support of the Prime Minister.

Nothing happens... And nothing will happen.

Death in childbirth was quite a common occurence in Regency times, but people did not know how to stop it. It was not until a few decades later that the use of antiseptics was discovered, and this greatly reduced the rate of deaths. Discovered by men by the way. It wasn't like men wanted women to die in childbirth.

Well, first of all, a significant part of the problem occurred when MALE doctors forced themselves into the process of childbirth, displacing female midwives, and those male doctors just happened to be doing many of their deliveries after doing dissections of corpses, and without washing their hands!

But even aside from that, the point you are not attending to is that it was WOMEN who were dying in alarmingly large numbers, and you didn't need to understand calculus to understand that the fewer pregnancies, the less chances women ran of dying in childbirth--and yet how many men said, hey, let's stop having intercourse after, say, the third or fourth baby, and find other non-pregnancy inducing ways of providing sexual satisfaction to each other that do not subject the wife to having a loaded gun pointed at them, i.e., pregnancy Russian roulette.

That is what JA was enraged about, the lack of concern expressed by the male establishment about the epidemic of deaths in pregnancy.

You are assuming that the women themselves didn't want sex, and didn't want babies, but that seems doubtful to me. Women can also enjoy sex, and women often want children just as much as men do, if not more so,

What if the Austens had decided to give up having sex after the first three or four chidren? We wouldn't have Jane thenm would we?

And many women had large families without coming to any harm, like Mrs Austen, who outlived her husband by many years, or Jane's niece Anna for instance.

You are also overlooking the fact that life was much more hazardous generally in those days. There were many diseases for which there was no cure, that could kill you quickly, and men died of them as well as women. Like Cassandra Austen's fiancee for instance. With life altogether more uncertain than now, childbirth was not the only thing that could abruptly end a life.

You have this rather Victorian assumption that ladies of the Regency era didn't want sex with their husbands, but I can't imagine Elizabeth being best pleased if Darcy decided to give up sleeping with her, or Emma if Mr Knightley forsook her bed. Anne Eliot would certainly regret Captain Wentworth absenting himself.