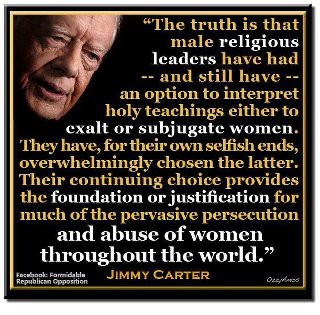 
When I first saw Jimmy Carter's above quote, I immediately saw the connection to my repeated claims in this blog and elsewhere that Jane Austen, in the shadow stories of her novels, was saying more or less the same thing about the deep-seated sexism of the state-sponsored Anglican Church 200 years ago during her lifetime. I think she'd be saddened, but not at all surprised, to learn that things have not changed much in that regard in many places in the world, even today in 2012.

She would not be surprised, because she showed she recognized the extent of the deep-seatedness of that church-based sexism, when she put the following rant in the mouth of Henry Tilney in Northanger Abbey:

"If I understand you rightly, you had formed a surmise of such horror as I have hardly words to—Dear Miss Morland, consider the dreadful nature of the suspicions you have entertained. What have you been judging from? Remember the country and the age in which we live. Remember that we are English, that we are Christians. Consult your own understanding, your own sense of the probable, your own observation of what is passing around you. Does our education prepare us for such atrocities? Do our laws connive at them? Could they be perpetrated without being known, in a country like this, where social and literary intercourse is on such a footing, where every man is surrounded by a neighbourhood of voluntary spies, and where roads and newspapers lay everything open? Dearest Miss Morland, what ideas have you been admitting?"

While the traditional Janeite interpretation of this rant is that Henry Tilney is correct in suggesting that terrible crimes could not have been perpetrated by General Tilney on his long dead wife, in an England where the church, the state and the family structure itself were there to protect English wives like Mrs. Tilney, I have made the case that this rant is meant to be read parodically, as Jane Austen's veiled mockery of this rant, because she DID live in an England where wives and unmarried women were subjected to all manner of abuse in the name of God, the King and the English family.

And, as for these American nuns (described in the above-linked Washington Post article) whom the current Vatican hierarchy is so intent on muzzling and stripping of legitimacy for their feminism, for their social activism--in short, for their genuine Christianity!---I wonder why these nuns don't think way outside the box and electrify the world and start their own Christian denomination on their own frankly feminist, socially conscious terms--Jesus (and Jane Austen) would have approved!