Today I have been honored to be invited to write a guest post at the English Historical Fiction Authors blog created and coordinated by author Debra Brown--thanks, Debbie!

Here is the link to my post, together with the introduction to the connections outlined in my Subject Line: 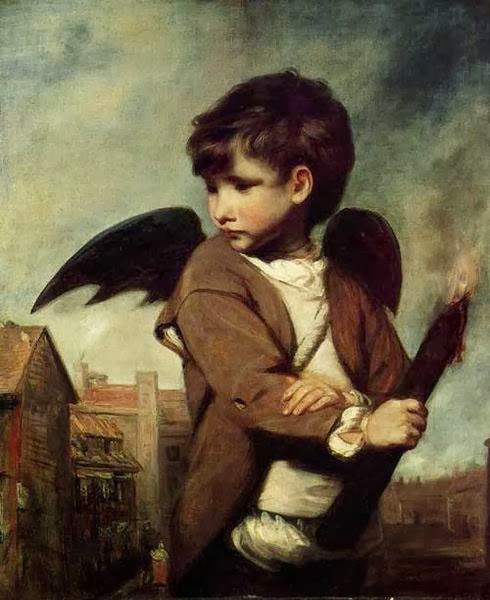 "...I’m here today to give all of you (even those unfamiliar with her novels) a sense of my unorthodox interpretations of her fiction—but also, what I hope will be of special interest to all you history buffs (I’m obviously one too!) who frequent this endlessly informative blog, which is the crucial, pervasive, but still largely unrecognized function of historical allusion in Jane Austen’s subtle, multifaceted literary artistry. And my ‘’ punch line”, if you will, will be my explanation as to why I’m 100% convinced that Jane Austen had the above very disturbing (just take a minute and look at it very closely!) painting---or “Fancy Picture” as its famous creator, Sir Joshua Reynolds, called them---especially in mind when she wrote Emma.

THE DUKE OF DORSET & HIS KENTISH ESTATE, KNOLE, IN THE SUBTEXT OF JANE AUSTEN’S NOVELS:

Only days ago I assembled the puzzle pieces of a single, particularly significant, historical/literary allusion, which Jane Austen spread across several of her novels—the Sackvilles of the great estate Knole in Kent, with her special focus on the notorious John Sackville, 3rd Duke of Dorset (1745-1799):

I will today provide only a sketch of different aspects of this complex allusion, and the role I assign to it in each Austen novel in which it occurs. However, I will be more than happy to provide further detail to anyone reading this post, who wishes to go deeper on any particular point.

But now I will (finally) begin by showing you the multilayered allusion to the Duke of Dorset and his Kentish estate Knole, in Jane Austen’s third published (but fourth written) novel, the dark brooding masterpiece, Mansfield Park...."   END OF QUOTES FROM MY GUEST BLOG POST


I will add one personal note---I first became acquainted with Debbie Brown two months ago, when I was writing my series of posts about the "dirt" referred to in all of Jane Austen's novels being "code" for all the horse manure and human sewage that covered the streets and roads of England during her lifetime. Here is what I wrote in this blog in January about the post that Debbie wrote some time back, that Google led me to, which provided strong historical corroboration for my argument:


"So Jane Austen was tapping into a very rich vein of cultural scatology which an alert contemporary reader would, I believe, have picked up on, when she had the Bingley sisters laughing at Lizzy's dirty petticoats.

http://englishhistoryauthors.blogspot.com/2012/09/historical-anecdotes.html
Historical Anecdotes by the English Historical Fiction Authors
…The Great Stink of London, 1858 by Debra Brown
"I greatly enjoy Liza Picard's book Victorian London. If you want to read numerous great anecdotes, her book is a wonderful source. Her first chapter discusses the smells of London past. Day and night in Victorian times, she says, London stunk. The Thames "main ingredient" was human waste. Human excrement was sold as fertilizer to nurseries and farms surrounding London by the night-soil men who emptied the cesspits. A chamber pot might be emptied on your head as you walked through the narrow streets, adding to the stench of dead dogs, horse and cattle manure and rotting vegetables.
By 1841 there were 1,945,000 people and 200,000 cesspits full and overflowing. Years of waste fermented in miles of sewers in Holborn and Finsbury with no access to the Thames. Even in aristocratic Belgravia, Grosvenor Square, Hanover Square and Berkeley Square noxious matter stopped up house drains and reeked. Buckingham Palace smelled from drains that ran below.
Cows were kept in cowsheds all over London in appalling conditions with no space for cleaning. Cattle, sheep and pigs sold in Smithfield Market walked through London streets leaving behind 40,000 tons of dung a year, and thousands of horses each excreted 45 lb. of faeces and 3.5 lb. of urine a day.
A 14 foot deep pit at St. Bride's Church was reopened every Wednesday to take in carcasses of dead paupers until it could hold no more. The whole neighborhood stunk.
Coal gas stunk, and gas mains leaked. In Bermondsey skins and hides were tanned using a process including dog turds. Refuse from hospitals, fishmonger's and fishmarket washings and offal, slaughterhouse offal, glue-makers, candle-makers, bone dealers, dye works, dead rats, dogs and cats and even, the January 1862 journal The Builder said, dead babes stank.
Finally there was a breakthrough, right? when water closets became a normal part of a house. By 1857 there were 200,000 of them all duly sidetracking the cesspits and emptying straight into the Thames via the sewers. The result was the Great Stink of 1858."

As is apparent from all of the above, neither Debbie nor I is afraid to show the role that the darker or dirtier side of life plays in history, a role that is often deleted out of squeamishness or ignorance.


So, please go to my guest post at English Historical Fiction Authors, and post your comments on my post there, and then browse around that wonderfully information blog to find answers to hundreds of historical questions as well!

Posted by Arnie Perlstein at 10:19 AM