Valentine ‘s Day & An Inadvertent Quibble on The Bard of Paradise


By a lucky bit of serendipity, I now have a true story to tell that unites Valentine's Day (a holiday which of course famously played a key part in the romantic plot of Jane Austen’s Emma), a great English author whose writing JA  knew and loved, and a much less significant author with only two degrees of personal separation from JA, whose writing was known to JA, and who in turn expressed  admiration for JA’s writing, and did so in print.

Before I reveal the identity of this mystery literary admirer of JA’s writing (those who know JA’s biography well might well deduce his or her identity from the data I already provided above), I will tell my little story of serendipity.

As I write this post, my wife and I are both sitting in our  living room, and a few feet away from us, on a low  table, sits a tall vase which contains the array of flowers which I recently gave her for Valentine’s Day. It  was a bigger one  than I had  ever previously given her, and it  included  a half dozen different  kinds  of flowers, including a couple of very tall birds of paradise (or are they all very tall?).  Here is a photo I just took of it: 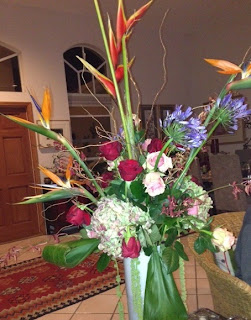 Anyway, she was just talking on the phone and describing the flowers favorably—which of course made me happy--when suddenly, due to the insidious influence of my studying too many Austenian and Shakespearean puns, and doing too many of  Will Shortz’s crossword puzzles, over the past decade, the punny phrase “Bard of Paradise” popped into my head.

And almost immediately thereafter, I  realized that if that were a crossword puzzle clue, the answer would (obviously)  be John Milton, given that he was one  of history’s greatest poets, whose greatest works were entitled  “Paradise Lost”and “Paradise Regained”!

My next step was clear—I knew I could not be the first person to think of this pun, it was just too good, and too likely to pop into someone’s mind over the past  320 years. And sure enough, there were a couple of modern scholarly references, in passing, to same.

However, the most interesting Google hit, to me, was one written by the mystery man I described above, in an 1835 edition of  Milton’s poetical works:

“It is unnecessary to copy the opinion which Johnson gives of "L' Allegro" and "Il Penseroso," because it is in every one's hands. Johnson yet allows that "they are two noble efforts of imagination." — They would be noble for a common poet; but not comparatively for Milton: I cannot allow them that high invention which belongs to the bard of "Paradise Lost." “

So, this mysterious editor disagreed with the approval of  two of Milton’s well known poems expressed by Samuel Johnson  in his vastly influential Lives of the Most  Eminent English Poets, because this editor would reserve the highest accolades for Paradise Lost.

Now, did the writer know that he was making a pun (or as Johnson famously put it, a “quibble”) on “bard of paradise”?  The term “bird of paradise”, to refer to actual birds, was already well established in English decades before 1835.

But…my vote at this point is that the writer of  the above quoted passage, whom I  know to have a pompous humorless fool who lusted after status, was not very likely to be a playful punster. And now  it is time tor reveal his identity to those who have not  already guessed it-- who else but Egerton Brydges, the clownishly pretentious rank-obsessed brother of Madam Lefroy, aunt of Tom Lefroy and close friend of Jane Austen during JA’s JA’s teen years and young  adulthood!

The pity is that JA did not live to read Brydges’s inadvertent pun, one which would have vastly amused JA, who wrote the following to her niece, Anna Austen Lefroy (yes, Anna married a young man from that same Lefroy family!), in an 1814 letter, about  Anna’s novel-in-writing  (which alas she never finished and burned in frustration):

“Your Aunt C[assandra] quite understands the exquisiteness of that name -- Newton Priors is really a nonpareil. Milton would have given his eyes to have thought of it. “

I think JA would have given a lot to have read Egerton Brydges’s  inadvertent  quibble on John Milton and his noblest creations, Paradise Lost and Paradise Regained.

And that is the end  of my little Valentine’s mystery, which grew from a frivolous little seed into a noble flower with, I hope, a pleasing scent and appearance.  If you will, this is my Valentine to all who honor  me by reading along in this blog.