The Ganges, The Big Pond, and The Horse Pond 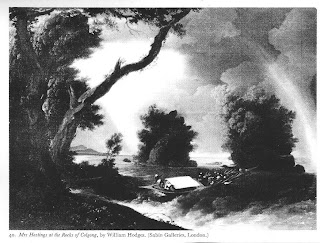 Apropos my very recent post about Jane Austen's explicit reference to a painting of Warren Hastings's wife in Letter 55 (see above image), in which I asserted that Sir Thomas Bertram was a representation of Warren Hastings, and in which I further speculated that Mary Crawford was arguably Sir Thomas's illegitimate daughter, Ellen Moody wrote the following in Austen L....

[Ellen] “Hodges’s picture: I suggest Diana under-reads and Arnie over-reads. If anyone reads my blog, you will see I write that Austen is likening Mrs Hastings’s trip down the Ganges to Cassandra’s trip with Anna: both get up very early, both helping people in distress. She is joking. Yes. The words also mean what they say: they are not especially witty: she would like that picture; the whole family professes admiration for Hastings and all that concerns him particularly. They would wouldn’t they? She likes sublime paintings and is reminded that they haven’t got a space for it. Indeed they’ve not got the money. It’s but two sentences: "I cannot help thinking & re-thinking of your going to the Island so heroically. It puts me in mind of Mrs Hastings voyage down the Grange, & if we had but a room to retire into to eat our fruit, we’d have a picture of it hung there.”

...and I responded thusly:

Ellen, for JA, two sentences were like two _pages_ for a lesser writer, in terms of density of allusion, subtlety, and power. At least you now concede that JA was joking in Letter 55, that’s a promising start. Let's see if I can carry you a little further on a perilous voyage into Austen's shadows:

You say I over-read in seeing so much in these two sentences from Letter 55, and the way I claim JA echoed them so strongly in Mary Crawford’s “heathen heroes” speech.

This is particularly ironic, given that my interpretation strongly supports the notion that JA believed Eliza was Warren Hastings’s illegitimate daughter, an interpretation on which you agree with me (and of course with Nokes and many others).

But aside from that irony, I would like to point to not one but _two_ _additional_ veiled allusions to Hodge’s painting, “Mrs Hastings at the ROCKS of Colgong” hidden in plain sight in JA’s novels.

First, this passage from MP when Mrs. Norris practically has a panic attack worrying in anticipation of Sir Thomas’s return voyage from Antigua:

“Tom arrived safely, bringing an excellent account of his father's health; but to very little purpose, as far as Mrs. Norris was concerned. Sir Thomas's sending away his son seemed to her so like a parent's care, under the influence of a foreboding of evil to himself, that she could not help feeling dreadful presentiments; and as the long evenings of autumn came on, was so terribly haunted by these ideas, in the sad solitariness of her cottage, as to be obliged to take daily refuge in the dining-room of the Park. The return of winter engagements, however, was not without its effect; and in the course of their progress, her mind became so pleasantly occupied in superintending the fortunes of her eldest niece, as tolerably to quiet her nerves. "If poor Sir Thomas were fated never to return, it would be peculiarly consoling to see their dear Maria well married," she very often thought; always when they were in the company of men of fortune, and particularly on the introduction of a young man who had recently succeeded to one of the largest estates and finest places in the country.”

And second, as an unexpected bonus, we have this little speech by Admiral Croft in _Persuasion_:

“Here I am, you see, staring at a picture. I can never get by this shop without stopping. But what a thing here is, by way of a boat! Do look at it. Did you ever see the like? What queer fellows your fine painters must be, to think that anybody would venture their lives in such a shapeless old cockleshell as that? And yet here are two gentlemen stuck up in it mightily at their ease, and looking about them at the ROCKS and mountains, as if they were not to be upset the next moment, which they certainly must be. I wonder where that boat was built!" (laughing heartily); "I would not venture over a horsepond in it.”

Look at the Hodge painting, with its tiny “cockleshell” of a boat dwarfed by towering trees and a mountain looming in the distance, and think about Letter 55, and it’s impossible not to connect the dots, and to see Admiral Croft’s laughter as JA’s laughter at the hypocritically sentimental narcissism of a man whose faithful wife braved death to nurse him, while he oppressed a subcontinent…and escaped punishment, and lived to return to England with fabulous wealth and live out his life in the fantasy world of his memories as a hero—in his own mind, most of all--among the heathens.

I sense a strong whiff of Hastings's self-absorbed fascination with his own survival of peril in Sir Walter's endless preoccupation with mirrors--and I almost wonder whether JA is wickedly hinting that the picture observed by Admiral Croft once hung in Kellynch Hall, but was now on sale (thanks to the canny machinations of Mr. Shepherd) in order to defray some expenses for Sir Walter!

Cheers, ARNIE
Posted by Arnie Perlstein at 11:15 AM