The Three Faces of Jane

Here is a link to the Guardian story about Byrne's bio and alleged discovery:

My vote at the moment, based on such incomplete info, is that it is NOT Jane Austen in Byrne's portrait, because it is such a different face from the one sketched by sister Cassandra, even though the age of Cassandra's Jane cannot be that different from the age of Byrne's Jane. And the expression on the face is so bland, I find it impossible to imagine the Jane Austen I know to allow such a portrait to have been made of her.

Here is that sketch of Jane Austen by Cassandra that is on display in the National Portrait Gallery in London: 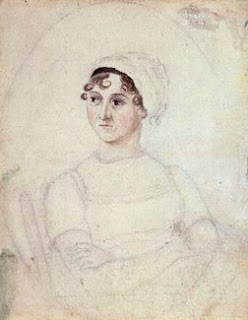 To me, it is the face of a woman who does not need a man for anything, a woman with broad shoulders who obviously was no Fanny Price, but who could work a day in the heat of summer in the garden and swagger off. A woman who....might very well have been of a gender orientation that the family just could not accept.

I am strongly reminded of the pose assumed, with arms confidently folded, by the character Leroy in the film Fame, at the end of his amazing audition, when he knows he has taken the admissions committee, and everyone watching the movie, by storm:

And what is also really amazingly lifelike about that sketch, is that if you do that "split-face" thing-first cover one side of her face, and then the other, you see what is alost always seen in photographs of human faces, a dramatic difference between the two half-faces. In this instance, the right side of Jane's face is, to me, that of a strong angry man, while the left side is a doe-like submissive woman. The entire paradox of Jane Austen, with her parallel overt and shadow stories, is right there in that face. I betcha that Jane ASKED Cassandra to draw her that way!
SHe's saying without the necessity of words, that she can take care of herself. And that pissed off look----it's the face of M.A.D.!

I just reread the above linked Guardian article and have the following additional responses to quoted portions of it:

[Guardian] "The portrait drawing, in graphite on vellum, had been in a private collection for years, and was being auctioned as an "imaginary portrait" of Austen, with "Miss Jane Austin" written on the back."

YES! That is EXACTLY what it must be! An artist who never saw her face imagined what she looked like, based on the treacly, neutered conception of Jane Austen, the PERSON, that prevailed circa 1870 when the Memoir was published.

When exactly did Jane Austen live in a flat with a view of Winchester Cathedral out Westminster Abbey, out the window?

Only once, for a brief period of time, when she was living practically within shouting distance of Winchester Cathedral. But.....that was when she was DYING, and was not exactly vertical, let alone dressed up!

So portraying her with such a backdrop shows either ignorance of that sad fact, or else (much less unlikely) cruel cruel irony.

And the misspelling of her name by one of the owners of the portrait does not exactly add to confidence in its having been drawn from life.

[Byrne] "The idea that it was an imaginary portrait – that seemed to me to be a crazy theory. That genre doesn't exist, and this looks too specific, too like the rest of her family, to have been drawn from imagination."

A crazy theory? Byrne has revealed her own pride and prejudice in her own words--she rejects what appears to me to be a plausible explanation out of hand as "crazy". But, if you think about it for 10 seconds, ALL of Christian religious art over nearly 2 thousand years is based on "imaginary portraits" of every single personage from the Bible, most of all JESUS!

So the depiction of Jane Austen in a similar vein, around about 50 years after her death, around the time that a "Gospel" of her life was being published by her nephew (the "St. Paul" of this little conceit), complete with excerpts from "epistles" written by Jane herself, seems very plausible to me!


[Guardian]: "Byrne pointed out that Austen did not become famous until 1870, 50 years after her death, and the portrait has been dated to the early 19th century, around 1815, on the basis of the subject's clothes. "Why would someone have wanted to draw her from their imagination, when she was not popular at that time?" she asked."

Talk about circular, bootstrapped logic at its worst! First, they date the portrait to 1815 based on the clothes--even though an artist working in 1870 would hardly have had to engage in archaeological explorations in order to find a thousand samples of Regency Era clothing to choose among to dress his imaginary Jane. And then second, Byrne relies upon that tissue-thin evidence of dating as the basis for claiming lack of "motive" to do the portrait at all. Whereas an artist working at the same time as the 1870 Memoir was published would have a HUGE motive to portray Jane!

So....unless Byrne has other ammunition in her gunbelt (such as, e.g., some scientific basis for dating the portrait with precision to 1815), I am 100% skeptical that this could be the real Jane Austen in that portrait!
Posted by Arnie Perlstein at 8:39 PM

What do you mean when you talk about Jane's family not being able to accept her gender orientation. I've searched your site for that phrase, but not found it used elsewhere.

How about this for starters?

Thanks, Arnie. I will give that and the links within a read. :)

You're very welcome, and would be even more welcome if I actually knew your name! ;)

I saw the documentary a few days ago and today I searched for the new portrait to see it again. That is how I fount your site.
When I saw the picture I thought immediately she looks like her brothers! And she kind of fitted my imagination of her. Funny how many people were immediately convinced it couldn't be her because she would never have done this or that - when she herself said she wished for a lot of money and a lot of fame which nearly came true in the last year of her life ... I wander off, sorry :-)
The next thing I did - I took your picture of her (because it was available here) and played around a bit: I mirrored it to make her look to the left side as she does on the new one, I angled the picture a bit and I was astonished to see the same woman - in a worse mood perhaps and with two more kilogramms :-) I did the best I could to make those two photos the same size and then morphed them - which was easy because they are so similar. And now - because I cannot send the picture via comment I think I will post it on my blog although my blog is a completely different thing :-)