The "view" from Beechen Cliff 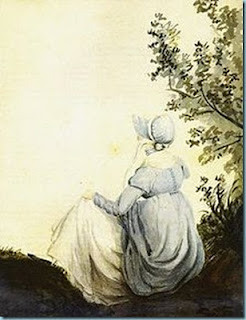 Yesterday, I was chatting with my friend Linda Walker (she who has written interesting Persuasions Online articles about why JA was sent away at seven, about JA and Tom Lefroy, and most recently about a possible non-murderous cause of JA's death, all of which I've cited from time to time). Linda often thinks outside the box about Jane Austen in very interesting ways, and as our chat ranged over all things Austen, we eventually reached one of the hot Austen topics du jour---the portrait that Paula Byrne (unconvincingly) claims to have been an imaginary portrait of JA.

That's when Linda blew my mind, by commenting that she _loves_ Cassandra's well known portrait of Jane Austen viewed from behind, which I have inserted, above. And the out of the box part in her comment which so amazed me, was that the thing Linda loves about that portrait is that it is from behind and therefore you don't see JA's face--and so it is, in a sense, a little joke collaborated on by CEA and JA--a portrait that is a non-portrait! That thought had never occurred to me, nor can I recall ever reading such an interpretation by any other Janeite, scholarly or amateur!

Now...that led me to an important question, which I ask because I never studied art history closely enough to have any good idea of the answer----are such portraits of one person drawn from behind, with no face shown whatsoever, very rare? Or was that some sort of pictorial convention of the day two centuries ago in England? But when answering my question, please factor in another crucial and curious feature of this portrait, which is that there really is nothing else there in the picture besides the anonymous woman!

I could imagine there being a fair number of pictures of a person depicted from behind sitting in an elevated spot, looking down on a landscape or cityscape panorama depicted below. You see many such photographs today, where the real subject of the picture is the panorama, not the person, other than giving "proof" that the person was there looking at the same scene. But here, aside from the female, a fragment of a hedge or large bush, and a small bit of dark, uneven featureless ground, there is.....absolutely _nothing_ else inside the picture frame! Half the picture---the "view" that the faceless woman is observing---is blank white space! The entire picture, then, is a depiction of the "frame" of a panorama that has been left out entirely!

Linda's outside-the-box idea of this portrait is rich in implications. It makes this seemingly prosaic, bland portrait into something completely different--in many ways, something surprisingly akin to 20th century abstract art where the ideas generated by looking at the picture are much more interesting than the picture itself! Or, as Tom Wolfe brilliantly and satirically suggested, it is like a tiny picture hanging in a museum, dwarfed by the large and elaborate curatorial explanation hanging next to it!

And that also fits perfectly with my sense of many of JA's juvenilia pieces as being startlingly akin to 20th century theater of the absurd--which is one reason--in addition to JA's sexual innuendoes--why the modern absurdist playwright, Joe Orton, was a _huge_ Janeite.

So in CEA's portrait of JA from behind, we have, at a minimum, the following ideas hovering over it, when we think about it:

that JA has no face.....because her novels published during her lifetime gave no name of the author other than "A Lady"--so this is a commentary on the suppression of female creative identity and fame.

that JA is gazing out at blank space, because Jane Austen saw, and depicted, extraordinarily subtle events that occurred in the world below, which she saw clearly, but which were invisible to many other people in her world.

You get the picture (ha ha), and I am sure you can, if so inclined, generate other ideas that this picture leads you to. But that's not the best part of this, which only occurred to me as I was getting ready to wind up this post---what popped into my head was a quotation from Northanger Abbey, which shows that JA was well aware of the parallels between pictorial and literary art, and was particularly sensitive to metapictorial and metafictional considerations, such as how one's perception of a scene changes, sometimes dramatically so, depending on changes in one's point of view:

"In the present instance, she confessed and lamented her want of knowledge, declared that she would give anything in the world to be able to draw; and a lecture on the picturesque immediately followed, in which his instructions were so clear that she soon began to see beauty in everything admired by him, and her attention was so earnest that he became perfectly satisfied of her having a great deal of natural taste. He talked of foregrounds, distances, and second distances — side–screens and perspectives — lights and shades; and Catherine was so hopeful a scholar that when they gained the top of Beechen Cliff, she voluntarily rejected the whole city of Bath as unworthy to make part of a landscape. Delighted with her progress, and fearful of wearying her with too much wisdom at once, Henry suffered the subject to decline, and by an easy transition from a piece of rocky fragment and the withered oak which he had placed near its summit, to oaks in general, to forests, the enclosure of them, WASTE LANDS, crown lands and government, he shortly found himself arrived at politics; and from politics, it was an easy step to silence.”

I've previously discussed the above quote in two posts:

But now I read that excerpt with fresh eyes, because it suddenly dawned on me, as I reread it with CEA's portrait in mind, that this portrait was the _ultimate_ injoke between JA and CEA. Why? Because this portrait from behind by CEA works perfectly as a portrait of Catherine Morland herself sitting atop Beechen Cliff looking down on Bath and deciding, under Henry's mischievous tutelage, that Bath was unworthy to make a part of a landscape! So we can almost imagine Catherine, if her pictorial skills had been up to it, sitting in Mrs. Allen's lodgings in Bath shortly after that excursion to Beechen Cliff, sketching a portrait of Eleanor Tilney from behind, and deciding not to include Bath in the picture! Wouldn't CEA's portrait therefore make a _perfect_ illustration for the above quoted scene in NA--and perhaps, that excerpt in NA really was _the_ specific inspiration for CEA to paint this portrait!

Cheers, ARNIE
Posted by Arnie Perlstein at 10:36 AM

Google Caspar David Friedrich or have a look here: http://de.wikipedia.org/wiki/Caspar_David_Friedrich

The view from Beechen Cliff might have been a trend during the 1810s as there are a lot of paintings in which people are only shown from behind, being a part of the landscape.

Andrea, thanks for the headsup about Caspar David Friedrich! That trend would be exactly the sort of thing that Cassandra and Jane would have enjoyed doing a parody of, by keeping the human backview, but deleting the landscape view! Any knowledgeable art lover would have instantly "gotten" what they were about.