Vickery's The Many Lovers of Jane Austen 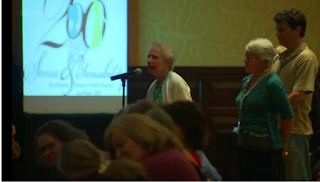 Yesterday, Diana Birchall posted the following link for the BBC documentary, The Many Lovers of Jane Austen, which has not been shown in the US, but can be seen here:

Thanks, Diana! I watched it with my father (who had great trouble, as usual, with understanding the English accents), and I have the following comments about it:

1. Overall, the program had high entertainment value, but was mixed to unimpressive in terms of the intelligence of the commentary about Jane Austen. For purposes of giving Jane Austen wider exposure in the culture, I would say the program was a great success, it will bring in many new readers for Jane Austen, and that is always a good thing.

2. Vickery's intent clearly was to try to get past "dear sweet Aunt Jane", and that of course is a very good intention, but, not surprising, there was often an uncritical acceptance of the standard orthodoxy about Jane Austen. To give one of several examples, a scholar named Lucasta Miller missed the boat entirely, by voicing the usual platitudes about Charlotte Bronte finding JA passionless---Vickery was not about to interview an iconoclast like Jocelyn Harris (forget about her reading _my_ blog!) to air a contrarian view on that subject.

3. Vickery raised one of the great questions of Austenmania---how is it that JA has managed the incredible double-dip of wide appeal among the culture-friendly general public, and also wide intellectual appeal for the literati--but Vickery hasn't a clue as to the real answer to that question--which is that JA intended to appeal to both, and wrote her novels to work on multiple levels, including (as Harding famously and acidly put it) writing the novels so as to be enjoyed by the very people being satirized and criticized on that deeper, less accessible level.

4. Vickery also read Henry Tilney's rant about England as a Christian country, as evidence that Northanger Abbey was merely a satire of Gothic novels, and thereby revealed that she was utterly ignorant of the large body of work, including mine, that shows that Northanger Abbey is, on a deeper level, an anti-parody critique of male privilege--but Vickery was not going there, not even close, for all her clothing herself in the guise of a debunker.

5. Bravo to Prof. John Mullan for pointing out that JA did not publish anonymously because she was so modest, but instead that JA actually enjoyed the guessing game she generated by publishing as "A Lady"---and I would go further and claim that JA intended to generate that guessing game in the first place!

6. Katherine Sutherland had a lot of screen time, and thankfully she did not repeat any of her absurd claims about JA needing an editor.

7. The history of how Austenmania arose was generally pretty good, but of course Vickery was not going to mention DW Harding and the revolution he engendered in Austen studies in the middle of the 20th century. Instead, Vickery took the standard orthodox line that FR Leavis was the most influential figure in Austen studies in that era.

8. All the film versions of P&P were briefly displayed, including a rare one I had not heard of, a 1967 BBC production.

9. There's an interesting interview with Earl Spencer, of course the brother of the late Princess Di, who shows himself to be quite the intelligent Janeite.

7. Several JASNA friends in the program, including a wonderful brief interview of the amazing Cheryl Kinney, who ad libs the funniest line in the whole program. And I realized one of the many parts I love about Cheryl's public speaking--not only does she know her material cold, and have a wonderfully insightful, witty style of writing and speaking--she also sounds _exactly_ like Roz from Frasier, which is the perfect voice to deliver that excellent content!

8. My friend Joan Reynolds of Vancouver made a few brief dancing cameos, and finally, and most interesting to me, take note of the gentleman who appears for a few seconds at precisely 38 minutes and 39-43 seconds into the video.

For those not technically inclined, I include a still image above.

So despite all my above quibbles, this is a wonderful video to show your non-Janeite friends and family, to try to pique their interest!

Cheers, ARNIE
Posted by Arnie Perlstein at 11:14 AM